Round 2 of the 2016 British Superbike Championship took place yesterday (2nd May) at Oulton Park Circuit.

The EHA Racing/Aprilia UK RSV4 RF again competed in the Superstock 1000 category, in a field of 43 bikes that included 24 Kawasakis and 16 BMWs.  Rider Ben Wilson qualified in 7th place as he increased his familiarity with the bike he rode for the first time at Silverstone last month.

The weather on race day was a combination of wet and dry and Ben and the team elected for a wet set up, which unfortunately proved to be not the best option, as the track dried considerably during the race.  At the flag Ben brought the RSV4 RF home in eighth place, which was a very credible performance given his deteriorating tyre condition.

With Ben’s experience and ability, together with his confidence in the Aprilia RSV4, the team is confident that a rostrum finish is not too far away.

The remaining rounds of the championship are: 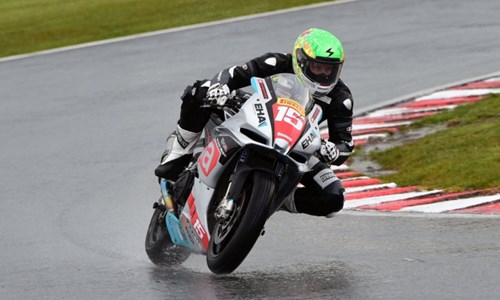