Donington, 24 May 2015 – The much feared rain never arrived to shuffle the deck, but Donington was the setting of an exciting World Superbike round anyway.

On his Aprilia RSV4 Leon Haslam got off the line well from the second row in both starts, demonstrating grit and determination despite the pain from his injury at Imola. Joining the pack of British riders who monopolised the top spots, Leon kept a good pace until about the mid race point when he was forced to give in to fatigue.

Despite the difficulties, the tough British rider valiantly defended two fourth place finishes which earned important points for him and gave the Aprilia Racing – Red Devils team yet another useful result. Haslam holds onto second place in the overall rider standings and fully intends to be a key player in the coming races which are more favourable to the characteristics of his RSV4 RF.

Leon Haslam: "I'm fairly pleased with the results today considering my conditions. Obviously I would have liked to have been on the podium for my fans, but I think that in the end two fourth places are the most we could have aimed for. I started well in both races and then I started feeling the fatigue. In spite of it all, even here we showed that we are in the game. I'm looking forward to some tracks that are more favourable for us so I can perform at my best. Now we'll start thinking about Portimão, a track which should cater well to my RSV4."

The best Superbike 2015 rookie, Spaniard Jordi Torres, started from the fifth row of the grid but in the two races he managed to gain positions as soon as the red lights went off, continuing his comeback throughout. Overtaking often on an unfamiliar track for him and against decidedly tough adversaries, Jordi finished the two races in seventh place. This is a double result which, after analysing the weekend, leaves the Spanish rider quite satisfied.

Jordi Torres: "The truth is that I'm pleased with these two seventh places. I started from way back but I fought in both races, bringing home important points on a difficult track. We knew that it would be hard here. The English riders are doing very well and they are on their home pitch at Donington, but we managed to improve in each session. This is a strange track because it brings out both our strong points and our weaknesses, so finding an optimum setup for the RSV4 wasn't a simple thing. Portimão will also be a new track for me, but since it is more uniform and smooth I think it might make life easier."

Third win in a row for the Aprilia RSV4 RF and Lorenzo Savadori in the Superstock 1000 FIM Cup. The Nuova M2 Racing Team Italian duo dominated the race from the first lap, finishing the 15 laps with a gap of almost 3 seconds ahead of the closest contender. Kevin Calia also performed well, finishing seventh at the chequered flag.
Thanks to today's win Savadori strengthens his leadership in the rider standings, with Aprilia leading the manufacturers. 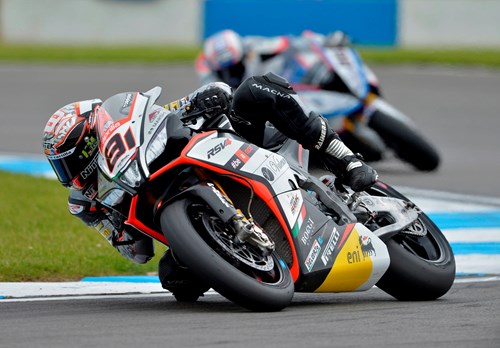