The “seven-fifty” from Mandello - protagonist of great success in the market - is enhanced in the version with led lights.

Milan - As the extraordinary success of Moto Guzzi V7 III continues, the best seller from Mandello that has gained popularity with a transversal and diverse public, V7 III Stone Night Pack is the protagonist of Milan evenings. Perfectly at home even in the metropolitan night-life environment, the new V7 III Stone Night Pack stands out with its remarkably easy ride, light weight, style, personality and construction quality, now joined by the modern high-tech spirit of full LED light clusters.

In fact, with the Night Pack, the typical essential look of the V7 III Stone is combined with the high lighting power of its LED headlight, turn indicators and taillight. The lowered position of the headlight and the instrument cluster, as well as a new rear mudguard, short and sleek, also give the V7 III Stone Night Pack a more slender profile. The dedicated seat is characterised by thermobonding and enhanced by the Moto Guzzi logo embroidered in grey stitching.

In addition to the newly introduced Night Pack, the Moto Guzzi V7 III family includes no less than six versions: the “forefathers” Stone, Special and Racer were joined in rapid succession by the V7 III Rough, V7 III Milano and V7 III Carbon, obtained by introducing a series of special parts to give each one a highly personal connotation and a unique character.

The “seven-fifty” from Mandello proved to be an outstanding starting platform for customisation projects. The catalogue of original Moto Guzzi accessories dedicated to the V7 III includes more than 80 parts and is constantly being expanded: the V7 III lends itself exceptionally well to an infinite variety of interpretations, so you can create your own made to measure special, like a tailor fitted garment. 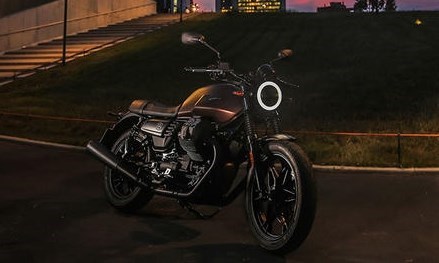